Growth vs development: Your baby’s body & brain working together Melodie de Jager and Cozette Laubser explore the connection between babies’ physical growth and their ability to reach their developmental milestones.

According to neuroscience, babies are born with more brain cells than they would ever use. Depending on the range of a baby’s movements during the first year, unused brain cells start dying at a rate of 10 000 brain cells per day. Luckily this is no cause for alarm because the number of brain cells is not important; what is important is the number of connections between the brain cells.

A sense of connection
Nature has a few simple, but wonderful ways in which to forge connections in order for growth and development to take place. These connections need to happen between:

How does this happen? When a baby is born and placed on mum’s chest for the very first time, his senses (touch, smell and taste) send information to his brain to make the connection: having spent nine months smelling and tasting mum’s amniotic fluid, he recognises mum not by sight, but through smell and taste. When his brain cells recognise this sensory information – mum’s natural mommy smell – the happy hormones in his brain start to dance, and baby uses the subsequent muscle connections to cuddle up, latch, and feed peacefully.

Growth vs development
Growth happens when your baby increases in size – gaining weight and length. You can track this growth with the Road to Health Card. Development, on the other hand, happens when the number of connections between the senses, brain and muscles increases, and baby acquires the skills that help him to reach milestones, make more connections, reach further milestones, and so on.

Baby milestones are the beacons that show evidence of brain development. And it’s important that these milestones are reached in sequence as their effect is cumulative. Each milestone uses the connections formed during the previous milestone, and expands on them. This cumulative and spontaneous journey from one milestone to the next also requires baby’s physical muscle growth and development (and the connections made between brain and muscle cells) – so if baby has ample opportunity to lie flat on the ground on his back and (under supervision) on his tummy, his unrestricted movement is the best “toy” he can have. As his core develops, so will more connections be made between body and brain, and within the brain.

Earlier isn’t better
Because milestones are indicators of brain development, the sequence of the milestones and the amount of time a baby spends repeating the same movements over and over during each milestone are so important. Crawling for three days is not enough to form firm connections. Research has proved that it takes thousands of repetitions to form a strong connection – some say 50 000 repetitions; some say 10 000 hours. Either way, it takes time to wire and develop a healthy, happy and clever brain.

Seeing is believing
Babies cannot communicate verbally, so we look at their movements and cries to tell us what is happening inside the brain and body. Look at this picture: While in this position the baby girl’s core is working extremely hard to keep her head upright and her body raised off the ground. We can see something has caught her eye, but we can also see that she was making her way to the toy. Her smile and bright eyes tell us how well her senses and muscles are developing. 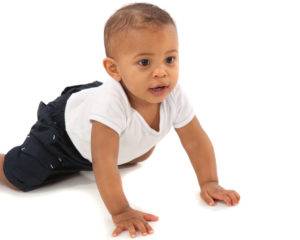 Look at the little boy above: We can see his hands are nice and open (an open hand is a learning hand while a closed hand is a resting hand, so we want baby’s hands to be open). We can also see something has caught his attention as his eyes and facial expression show interest.

Encourage repetition in the right environment
Use of supporting equipment like reclining chairs, walking rings, must be kept to a minimum. It is really important to make sure we set up our babies’ environment to encourage movement and play. We want the senses and muscles to work as often as possible, so we need to create development opportunities, rather than restrict or confine movement to a chair.

Will putting baby on the floor once ensure an intelligent baby? No. The pathways from the senses to the brain and from the brain to the muscles need a lot of repetition to become myelinated or permanent. It is repeating the same things over and over that stores them in memory.

Undercover development
The frustrating thing for young parents is that it looks like nothing much is happening during the first 15 months – they stimulate, they show, they touch and name, and baby gives very little back in return.

At the BabyGym Institute we use the Chinese bamboo as a metaphor for what is happening with baby. According to Stephen Covey, the Chinese bamboo grows 1cm in its first year. In its second year it grows another centimetre, and in its third year it only grows – ever so consistently – another centimetre! But in its fourth year, the bamboo shoots up to 10m! So, what really happened in the first three years to enable that growth spurt in the fourth year?

In the first three years, not much happened above the ground, but that’s because a lot happened underground – the root system was growing to permanently anchor the bamboo. We can compare the Chinese bamboo with a baby’s brain because in the first 1 000 days of a baby’s life, it doesn’t seem like a lot is happening. Baby cannot talk, read or write. But rest assured, the brain is building pathways at a tremendous rate to anchor your child for life.

Building connections
A developing brain can be seen in action when Grandma and Grandpa are about to leave and we say, “Wave to Grandma and Grandpa. Come on, wave… They are about to leave, wave,” and nothing happens. As Grandma and Grandpa turn the corner, baby lifts his hand to wave. Why does he take so long to respond?
Learning a new word or action is similar to walking through a dense field: the first time is slow going and takes a long time, but if you stick to the same route and walk it often, a pathway appears and you begin to move much quicker and with less effort. When baby hears “wave” the first time, it takes a long time for the message to travel from the ear to the opposite side of the brain and then all the way to the hand on the opposite side of the body.

Be involved and see results
This is why an involved parent is so important, because an involved parent interacts with baby and repeats many new and exciting things over and over until those pathways become permanent and myelinated. And when baby is allowed to move and play freely from day one, the chances are very good that baby will spontaneously reach each milestone in sequence.

← Friendships & babies: A balancing act How to wean your baby →